The Poetics of Poetry Film, Intellect Books and The University of Chicago Press published June 2021. All details can be found on its own page on this site and under publications at Liberated Words CIC.

I was one of the editors on the really fascinating Geopoetry and Geopoetics collection Earth Lines (my title!) published by the Edinburgh Geological Society. I have written more on this on the Liberated Words site, but the editors were: Norman Bissell, Philip Ringrose, Brian Whalley and we were all led by Patrick Corbett who has steered it to fruition. Norrie and I were the only non-scientist/geophysicist/geologists in the group. The crossovers and mergings between poetry and geology and other sciences has thrown up some extraordinary writing. The book contains in-depth essays on the history of poets writing on rocks and stones etc. or the history of geology in poetry, as well as revealing insights from Norrie on geopoetry and geopoetics. Familiar poets include 'stone poet' Alyson Hallett, Lynne Goldsmith, Michael McKimm, Yvonne Reddick, Sarah Acton, John Bolland, John Hegley and Ken Cockburn. Brian Roy Rosen also penned a mammoth song cycle. Dr RM Francis contributed a revealing essay on Ancestral Genius Loci and place identity which has many inspiring moments in terms of family history research and poetry. Full of illustrations, the poetic content follows a particular pattern, starting with Stratigraphy, then Geological Processes, then Geologists at work, then Geoidentity then Geopoetics. Following my suggestion, I am very pleased that Angus Miller at the Society has created an Earthlines Online site, where audiovisual works, poetry films etc. can be found, either echoing the written poems or as separate entities. There is also a geolocation map of some of the sites that inspired the poems and so the whole process turns full circle.

It has now had a lovely launch up in Scotland and now I am hoping that we will have a few readings down in the South before not too long.
​ 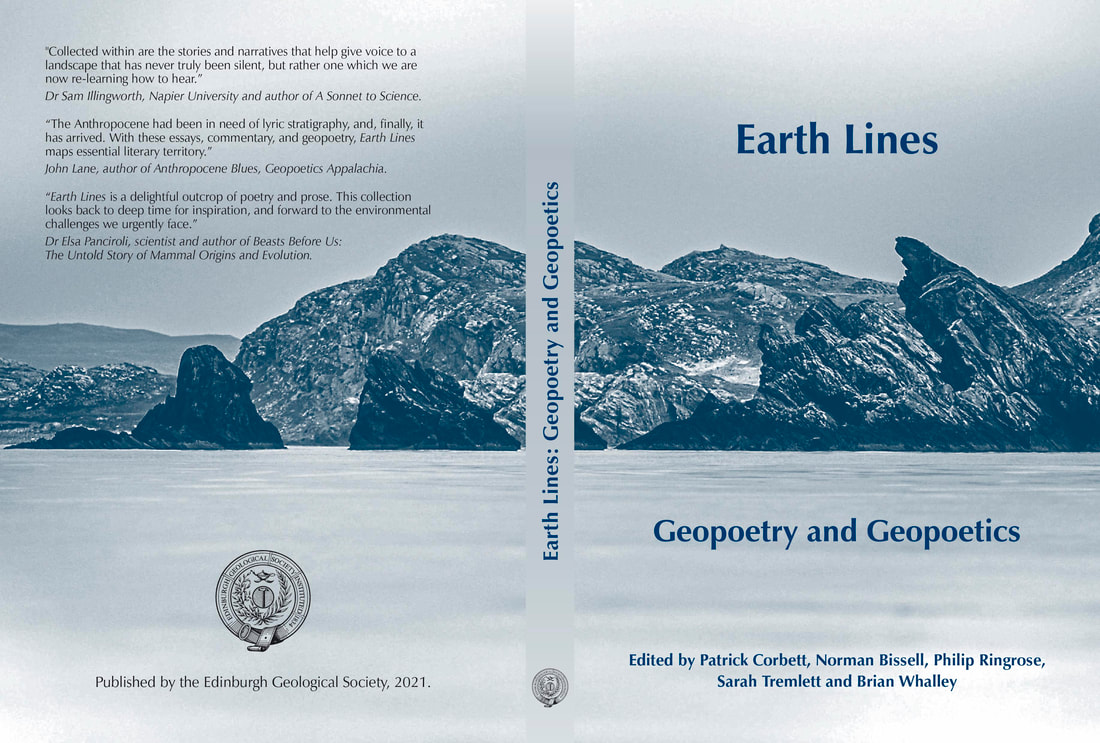 'I Write to You Because Your Imprint's Everywhere'

From the anthology No Map Could Show Them (Chatto & Windus, 2016) poet Helen Mort has focused on women who have had a particular relevance to her and across history. In 'Dear Alison' she writes not about but to the late Derbyshire-born mountaineer Alison Hargreaves who died climbing in 1995, and whose decision to continue climbing in the face of being a young mother has left its haunting shadow in her wake.


In discussing the making of 'Dear Alison' Helen observed how for her mountaineering and writing poetry are very similar; and how the act of climbing might help shape a line of poetry on the subject – an area that Judy Kendall herself is familiar with.

The resulting poetry film, made with Dark Sky Media and UKClimbing.com sits between a form of documentary tribute through poetry, and an evocation of the very themes that preoccupy the poet herself. It is in fact a form of portrait of Helen through Alison; or, not only Helen as conduit for Alison but Alison as conduit for Helen, where we see Helen more clearly as a result. And it is also a metanarrative on the process of writing: of the struggle of putting one word after another; of literally conceiving poetry, line by line.

The film follows Sheffield-born Helen as she climbs at Stanage Edge rising dramatically above stark moorlands in the Peak District, UK.  She has mentioned before that this is a place where she finds she can compose; where lines surface and images resonate, whether climbing, running or walking with her whippet Charlie.

Echoing the contrast of the landscape the filmmakers have shot Helen's authorial journey partly in extreme close-ups as if we are trying to see as close as possible into Helen's mental poetic footholds, as well as the wider rock-climbing experience. As such the filmmaking is astoundingly direct, condensed and uncompromising; it is held together editorially as a series of complete visual vignettes, rather like the serial nature of climbing itself, from ledge to ledge. Most importantly we feel we are with Helen not watching her, and as such we also are touched by and reminded of Alison's journey and spirit. Here the protagonist as writer but also climber is constantly shadowed by her subject, and as Helen moves up the rock face we sense both the struggle to write but also the struggles of women who are courageous and take risks.

With the topic of non-metaphorical poetry films still echoing in our minds we also might consider this particular work as riven with metaphorical seams (rock metaphors to discuss metaphor notwithstanding).  Throughout 'Dear Alison' close-up shots of Helen's hand writing the poem punctuate the film and at the end she draws a firm but balanced line under the last word. We might think of this as jointly associative for both climber and poet: the metaphorical horizontal evocation of the joyous release from the vertical ropes and carabiners that stop a climber's fall; or equally, the poet's release from language, deliberately letting the line go; the summit having been reached. However, the analogy between mountaineering and writing ends there: the poet displays their roped words, carabinered like woven lace; the mountaineer hauls in their rope erasing all traces of the climb.

A Coda
I too was born in Sheffield, my mother's hometown, where her side of the family were painters and decorators for nearly a century and my father worked in the steelworks.  Whilst Helen grew up in Chesterfield I was brought up 'down south' on the borders of Herts and Cambs, where my mother never regained social consciousness, having lost the shopkeeper spirit of camaraderie that sustained her. Seeing life through her eyes, her failed compromise, has given me an exile's fondness for the town. As such I take to Helen's writing, and her crafted phrasing, as if it were of the city itself; so I too, like Helen, am channelling identity through another woman's experience.


Helen Mort's first collection 'Division Street' (Chatto and Windus, 2013) was shortlisted for the T.S. Eliot Prize and the Costa Award and won the Jerwood Aldeburgh Prize. Her second collection 'No Map Could Show Them' was shortlisted for the Banff festival's mountain book awards in Canada. Helen is a Lecturer in Creative Writing at Manchester Metropolitan. In 2017, she was a judge for the International Man Booker Prize. ​

A trip that made me remember that the soul of poetry is still alive.

Highlights for me include:

The Audio Zine - a new experience where we sat in darkness and listened to poets reading with sounds from their favourite places, alongside music/sound art culminating in what felt like a highly refined orchestral piece.  The overall experience was very intimate and allowed a highly personal interpretation

Prague-based Ondrej Buddeus' performance texts comprising solo, duologue and choral elements, as well as poetry film,  featured individual compositions that developed a thought or concept that may or may not lead to the next.  The duologue or dialogue also involved cross-translation into Lithuanian that created in my mind a third area of performance poetry.

Alessandro Bosetti from Milan provided a mesmerising performance improvising to his own pre-recorded composition delivered via laptop from the centre of  a darkened and packed room. This format creates opportunities for dialogue or sound-making with the self; repetitive phrases and long, flying bouts of fantastical storytelling.

She's A Show gave us a ranting, raving tightly produced show that pumped up the crossover between poetry and the sexuality of a rock performance.

Making haiku poems myself I was particularly interested in Cinema Fragile's workshop with haiku video poems.  Their creative method relied on respecting the spirit of haiku and its rhythms through editing in 5/7/5 seconds or double time.

Apologies to the performances we missed, but I have good memories of the poetry slam and its friendly, less competitively driven spirit than the UK; of speaking at the National Gallery of Art and discussing the state of poetry film today; experiencing the friendliness of Gabriele and all working at TARP - we were given a highly interesting tour of the sights - and in general soaking up new approaches to the art of making poetry.  It was very hard to leave.